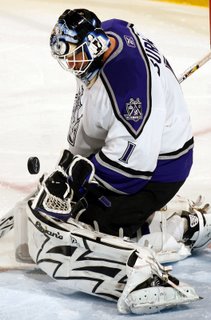 After stopping 40 shots in Los Angeles' 7-0 win over Florida on Saturday for his 38th career shutout you have to wonder...does Sean Burke have another couple years left in him at the NHL level? His coach and teammates were singing his praise after that huge win.
Marc Crawford said:

"We haven't had a lot of problems scoring goals this year -- it's been keeping them out that's been the biggest problem," Crawford said. "Sean's come in and taken that burden away from us and it has given us a better feel for our team."

"He has made so many great saves the last two games, it's much easier to play when you're not afraid what's going on (behind you)," Frolov said.


How good were his last 2 games? He has only allowed 2 goals on 79 shots. The other win was a 3-2 margin over the Canucks last week. In 6 games with the Kings this year since being acquired by L.A. January 18th, Burke is 2-2-1, with a 2.43 GAA and a .929 save percentage. The latter 2 stats are easily better than any other Kings goalie this season. If Burke keeps this up, and with Cloutier sidelined indefinitely and Brust and Fukufuji struggling he could be a starter for the rest of the season, regardless of the fact that he just turned 40.
Burke has played in 797 NHL regular season games with 10 different teams. He has 318 wins, 331 losses, 101 ties. His goals against average and save percentage numbers look decent at 2.95 and .902 respectively.
His playoff numbers are less than stellar: 38 GP, 12 wins, 23 losses, a 3.32 GAA, and a sad .888 save percentage. Remember how much hate-on that Lightning coach John Torterella had for his goalies last season?
Burke has alot to prove if he wants to stick in the NHL. In fairness to him, alot of the time he has been placed on mediocre teams and then disposed of. His last great tenure was with the Coyotes in 1999-2004. He led that team to a playoff berth in 2002. He was traded away after Brian Boucher emerged as the new #1 goalie in Phoenix.
Since I've always been a fan of his, I hope he succeeds. For everything Sean Burke, see Legends of Hockey. 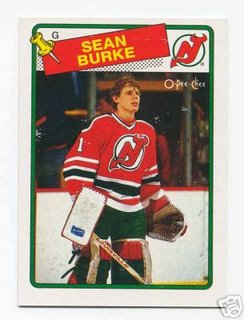