Just say no to Foppa

Share All sharing options for: Just say no to Foppa 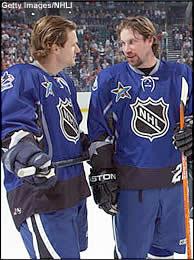 I may as well hop on the bandwagon with all the 'Forsberg to Vancouver' talk. It starts to annoy me when we hear every summer and at every trade deadline rumors of Forsberg playing in Vancouver with his best buddy Naslund. It's becoming repetitive. The really big difference now perhaps is that Forsberg is on his last legs and his value has dropped somewhat. Are we even to think that Dave Nonis is going to bite on Foppa?
For every reason, except for the fact that a Naslund/Forsberg combo would be sweet, the answer is and should be a resounding NO. In my opinion, Nonis, who is of Brian Burke mold, will not sacrifice the future of this team on a gamble. He has repetitively stated that. So I guess Forsberg mat not be going to Anaheim either, as was speculated. It's just my opinion.
Nah, the Canucks are 'nearly' fine the way they are, playing as a team, silencing the critics like myself who said they wouldn't score goals this year. Right now the their team chemistry is probably the highest it's been in over a decade.

Think Buffalo. You don't see Buffalo bowing to the gods of greed every time a big name player becomes available. They are building from within. Nonis is doing that now in Vancouver.
Don't pay attention to what Calgary is doing. So what if they got Conroy back and now lured in Brad Stuart. Calgary is rolling the dice with their team chemistry when they add and subtract this many players. Even if those guys help the Flames what does it matter? Is Calgary that much better than us? Nope.
If the Canucks can keep focused and continue to bow to and believe in the system of Vigneault, they should be absolutely fine and are playoff-ready, oh yeah, believe it!

Priorities. So if not Peter the Fragile, then what are Nonis' plans for the deadline? A part of that depends on the return date of Ryan Kesler. Let's just say Kesler returns before the playoffs. Then can we expect Nonis to look for a bonafide backup to Luongo? Sabourin is not quite ready to face pressure at the NHL level. Every time I see Luongo lay on the ice like he's dead after something happens to him, I freeze with fear! I wonder if Nonis feels the same when that happens...of course he does!
Priority #2 would be to fill Kesler's spot if he didn't come back. To that, I still say Martin Gelinas or Gary Roberts-types. Someone with a Cup ring or playoff experience.
But honestly, as much as it wouldn't hurt to have Naslund and Forsberg on the same line, I think we should be patient with Nonis and this team. The Flyers' asking price for Foppa is too high I'm sure, and we should horde any top round draft picks that we get and have, not piss them away on a big-name guy with a hospital wristband. That is something that the Leafs will do.