Huselius needs to smarten up

Share All sharing options for: Huselius needs to smarten up 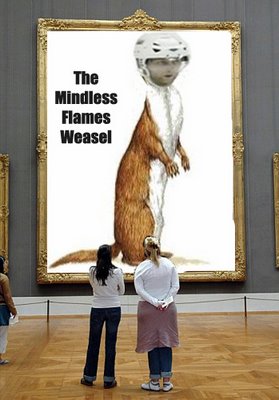 It shouldn't anger me, really, because I'm all for Calgary losing points, but Kristian Huselius was, in my opinion, pissing away potential points for the Flames this past week being overly pretty on his shootout attempts. And he did that TWICE: Both times the Flames lost. The first time was against Chicago last Tuesday, where he tried a Marek Malik-style play, putting his stick through his legs and passing the puck to himself to maybe bury a backhander past Nikolai Khabibulin. Huselius flubbed his shot. On Saturday night, he tried to be fancy again on Ryan Miller in the shootout, skating by him and trying to 'dribble' or stuff the puck past Miller. Of course, Miller stopped it easily, and then looked over at Huselius as if to say: "You can't embarass me!" No, Huselius is doing that to himself.
In Tuesday's game, Huselius was the first shooter, so he could be cut a very minor bit of slack. But he was the final shooter against Buffalo. Why mess around like that? Bury it! There is no reason to put on a show when your team is trying to take over top spot in their division. Those are two points that Flames could be ahead of Vancouver right now. Every dammed point counts.
I thought it was great that Ray Ferraro said the same thing during the 2nd intermission of the Stars-Avalanche game today. Brett Hull called it a 'double-edged sword, because the shootout is also designed for entertainment value. Sure, sure. How the hell can a coach put up with these kind of theatrics when these games mean so much?
There is only one answer, and I think that Saturday's OT between Pittsburgh and Toronto proved it: Abolish the shootout and play 3-on-3. That or let the mindless Flame Weasel Kristian Huselius or anyone like him ride the pine instead of partake in a shootout attempt. 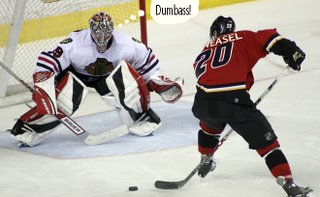 Here is the video that Matt was referring to in the comments section. This is Huselius scoring in the Flames' skills competition with the same move he tried on Khabibulin.

On a side note, it's good to see more goalies more often attempting a poke check on these shooters in the shootout. Why let the guy dipsy-doodle around you when you can poke your stick at him and force his hand? It makes the player have to be perfect or take a shot from further away.