Share All sharing options for: Hawks 3 Canucks 0: F for Effort 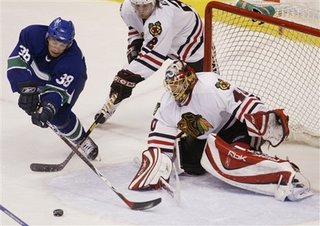 Patrick Lalime must be feeling pretty good about himself right now. He stopped 34 Vancouver shots and posted his first shutout in nearly 3 years, as the Hawks defeated an uninterested Canucks team 3-0 tonight. The Canucks' chances were not even spectacular. The majority of their shots were from the outside. They just didn't have any gel against a team that they should have defeated tonight to take over top spot in the Northwest Division.
The Hawks fired 23 shots Luongod's way (2 of their goals were into the empty net), had way more hustle than the Canucks did, and deserved the win. Adrian Aucoin scored an early goal in the 2nd period after Bieksa failed to clear the puck out of the zone. Aucoin's shot eventually deflected off Bieksa's stick and past Luongo for the first, and winning goal. Bieksa slammed his stick against the back of the net in disgust.
But let's not blame Bieksa for this loss. He came back strong in the 3rd and could have KO'd Karl Stewart had he connected with one of those haymaker lefts during their fight. But even that could not spark the Canucks to surge to victory. Bieksa's reaction after the fight told the tale. He was frustrated. This team could not get it together tonight. They were out-hustled nad unorganized. The passes were not connecting. Its amazing how much 24 hours can make a difference in this team's chemistry.
Enough of that. Let's talk about Patrick Lalime. I have been a fan of Lalime ever since he unfairly got booted out of Ottawa after their 7th game loss against the Devils in 2003. I think that was unfair that he took the brunt of the blame for the Sens not getting to the Finals. Ever since then, Lalime has lost his confidence, has played in front of shitty teams (St. Louis especially) and has not had a break since...until tonight. Tonight he was steady and composed and deserved the win and shutout. After suffering a herniated disk problem, he returned to the AHL and posted a .930 save percentage and a 3-1 record in the last 3 games with the Norfolk Admirals.
This loss by the Canucks didn't sting too much did it? Know what? It should.
Just because we're one point out of 1st in the Northwest Division and cruising along doesn't mean we can afford a loss. This was still a MUST WIN. If we miss the playoffs by one or two points, we will look at games like tonight's game and think: "Hell, we should have won that one." This is not the first time the Canucks have not showed up after a big win. There are many other examples:
1. Defeating the Stars 2-1 on November 6th and then losing 6-0 to the Ducks on November 9th.
2. Defeating the Wings 4-3 on November 22nd and then losing to the Predators 6-0 on November 23rd.
3. Defeating the Panthers 4-3 on January 7th and then losing 5-2 to the Wild on January 11th.
A playoff-ready team shows up for games regardless of previous outcomes. That is the sign of team maturity. That is something the Canucks need to learn quickly.

3 Stars:
1. Patrick Lalime
2. Martin Havlat. 1 goal and 1 assist.
3. Roberto Luongod. Was the only Canuck except maybe Josh Green that showed up tonight. Luongod made dashing glove saves but got no support from his teammates tonight. 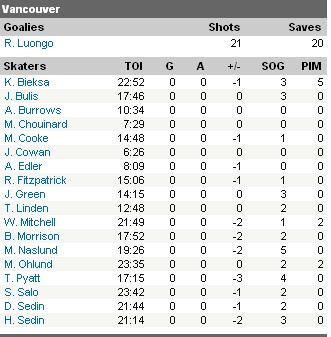