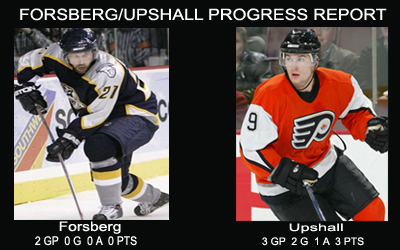 Of course it's much too early to really start heckling Forsberg for his initial offensive futility in Nashville. But you have to admire Scottie Upshall's immediate impact in Philly. Upshall has been waiting quite a while to get more icetime and to be relied on more.
From the Times, regarding Upshall:

Jeff Carter, Kyle Calder and Scottie Upshall combined for all three Flyers goals. Carter and Calder each had a goal and two assists and Upshall had a goal and an assist.


Following the Preds' win over Phoenix on Monday night, TSN reported this:

''The Forsberg line could have scored three or four goals, easy,'' Predators coach Barry Trotz said. ''They were all over the offensive zone. They didn't get anything, but they were dangerous, and that's what you ask for.''
Forsberg thought he and his linemates were communicating better on the ice.
''They are fun to play with,'' Forsberg said. ''We just have to make sure we bury our chances and keep going. I had barely met the guys before Saturday's game. At least I know their names now.''