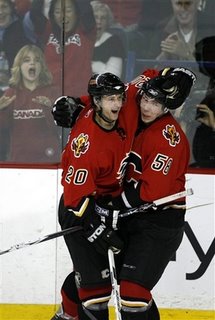 There is not any need to post a 3 paragraph piece on tonight's game. The bottom line is that the Flames skated harder and had more desire to win this game. The Canucks were outshot 42-28. If it wasn't for Luongo, this game would have been 7-3. Luongo took a Dion Phaneuf point-shot off the side of the mask in the 2nd period and laid on the ice as if he were dead. I panicked. But he got up and finished the game. The problem was that the Canucks were out-hustled, outshot, and really did not deserve a win tonight.
It was only the Canucks' 2nd loss since Xmas. The Flames are 20-2-o at home over the past 3 months. Since the acquisition of Craig Conroy, the Flames look confident and poised to take over and keep top spot in the Northwest Division.
What was the turning point? Daymond Langkow's PP goal at 3:54 of the 2nd period. The Canucks were getting into penalty trouble and the Flames finally capitalized. After Langkow's goal, the Flames took over the momentum of the game, and really didn't look back until they were on their heels late in the game with Luongo pulled. Taylor Pyatt scored to make it 4-3 at 18:10 of the 3rd period, and the Nucks nearly tied it in the dying seconds. But let's be honest here. A Canucks' tying goal would have been an undeserving prize. The Flames played harder and deserved the win.
-Bunard did not show up.
-Linden was lackluster.
-Bieksa was golden again.
-Luongo is Luongod.

1. Alex Tanguay. 1 goal 1 assist.
2. Jarome Iginla. 2 assists. Finally he had more room against the Nucks.
3. Roberto Luongod. You know, that glove save that went to review was one of the best saves I've seen all year.

Naslund had this to say:

"We had a real poor performance in probably our biggest game of the year, it's inexcusable," Canucks captain Markus Naslund said. "Obviously, they deserved the win. Luongo kept us in there for a long time when maybe we shouldn't have been in there."