A few thoughts about Eklund on Sportsnet's Trade Deadline Show

Share All sharing options for: A few thoughts about Eklund on Sportsnet's Trade Deadline Show 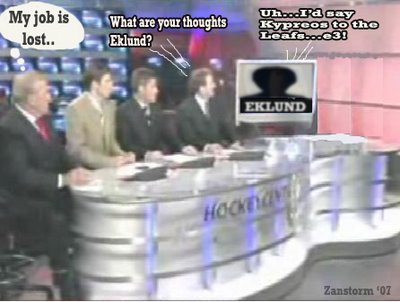 Eklund-bashing has become a regular occurrence in the hockey blogosphere. The news that Eklund from Hockeybuzz would make a guest appearance on Sportsnet's Trade Deadline Show has sparked even more rants, this time from JJ at Canucks Hockey Blog and Alanah at Canucks and Beyond. They of course question Eklund's credibility because he hides his identity amongst other things. Alanah goes one step further, by saying that NHL Bloggers have been slowed in getting media passes because of Eklund especially. That was not met well by Chris deGroat from The Checking Line, who quickly defended Eklund in C&B's comments section. Fun times! A lot of us got to pick on Chris a bit, but bottom line it's worth going over there and checking it out before the fire goes out, if you haven't already. The verbal battle at Canucks and Beyond is still ongoing!

Why does Eklund hide his identity? After following a link from JJ's post to the HF Boards, I came across this from Eklund there:

the anonymity is just my "thing." does it make me a credible journalist. no it doesn't. I know that there are certain people who will never take me seriously as long as I keep it up...and I have to say if I was you I would have all the same questions. I don't know why I stay anonymous some days, but I do know I get alot more people to talk to me this way (and more babes).
...like I said, for now it is just "my thing." and feels right I guess. The eklund backstory is so easily explained, and I have a standing invitation to tell it on CBC to a reporter I respect and who knows the story. I promised him the WHOLE story some day.

Alright, let me get back to the spark that started the fire. Does it ruin Sportsnet's credibility to have Eklund guest on the show? DeGroat informed me that Eklund will not appear on the show in person, so that takes away a bit from what my opinion of the matter is. Alanah had mentioned it as a possibility and I think it is a big one: Sportsnet is trying to capitalize on Eklund's controversy, and in my opinion, it really isn't a bad idea.
For one, Sportsnet should be desperate because they are second-rate to TSN.
Secondly, Eklund is going to be a 'special guest' on the show, meaning he will get limited air time. It's not like he is going to sit between John Garrett and Nick Kypreos. DeGroat mentioned that Eklund will not be on camera. I think he'll probably be feeded in by phone once in a while with updates, not behind a curtain or with a bag over his head like some people jokingly insinuate!
Thirdly, this will not wreck Sportsnet's credibilty in general. Having guys like Jason Portuondo calling the Canucks 'Canooks' will do that all on it's own! :) To hockey bloggers it will wreck it for the most part I'm sure, but not to the general non-blogging public. The general viewing audience won't care who he is.
But I still think that even hockey bloggers will tune in out of curiosity. I will. What if Kypreos completely disagrees with Eklund on something? Will he eat him up? I don't value Eklund's opinions on where players are going, nor do I turn to his site for anything but to jab at him once in a while. If I want good info, I go to Spector's because he thoughtfully analyses every rumor he hears. And that is how the rumors should be handled. What is the rumor, and why or why not is the rumor even possible?
I don't care anymore about who Eklund is. All I know is that his allure, especially through anonymity and claimed sources has gained him a successful website, and a spot on one of Canada's biggest sports stations on one of the biggest days in hockey. Controversy creates cash, and Eklund is riding it to the bank. Especially as long as there are enough suckers out there that buy into it.