***THIS POST HAS BEEN UPDATED BELOW***
(Click the Image to look into Edmonton's immediate future. Don't bother if religious humor offends you)
Tonight's Oilers/Canucks game is not just another regular season game. This is a crucial game where a loss for either team will immediately impact their Western Conference fates. A loss by the Oilers will increase the spread between themselves and the Canucks by 8 points. It will also keep them 6 points out of the final playoff spot in the West. So is it fair to say that there is more pressure on the Oilers to win tonight? Absolutely.
But there is plenty of pressure on the Canucks as well. They need to widen the gap not only on the Oilers, but also the Wild, who are on the verge of passing them, and the Flames, who are only 2 points ahead of Vancouver in first spot in the Northwest.
Hey, my fortune telling images are in good fun. But I can't help but feel the competitive hatred for the Oilers and their fans right now. Tonight is huge.
The last thing I want to do is visit the Battle of Alberta tomorrow and see those egotistical Oilers fans gloating. Nope. That should be a one-way street. The Canucks should win every time, and us decent Canucks fans should spam the B.O.A. to death every chance we get!
I'm actually watching the game with a bunch of Oiler fans tonight, and I cannot stand the possibility of them pointing and laughing if the Oilers win...so..
Go Canucks! Destroy them!!!!
-------------------------------------------------------------------------
UPDATE AT 10:42 PM, POST GAME

Well well well. I guess we witnessed the Oilers' resolve tonight. The Canucks matched the Oilers' physical play, remained disciplined for the most part, capitalized on two 5-on-3 powerplays, and then buried a 'desperate' Oiler team with their defence.

"Any time you get in a position where you have to kill two full minutes of 5-on-3, it's difficult to overcome," said Oilers head coach Craig MacTavish. "We are good enough to win, but we aren't good enough to overcome that kind of disadvantage."


After Edmonton's newcomer Zack Stortini, who I f***ing hate already, ran over Lukas Krajicek and put him out of the game, the Oilers were flying high. But guys like Jeff Cowan and Matt Cooke responded with physical play of their own, letting the Coilers know that the Nucks were not going to be pushed around. After Cooke hit Hemsky, the Oilers lost their cool, and Raffi Torres got a misconduct penalty, putting the Oilers down 2 men again. Markus Naslund capitalized on that 2-man advantage, scoring a goal in what seemed to be a double-slap-pass play with the Sedins.
-Oh yeah, the Sedins had 9 points all together.
-Luongod stopped 28 of 30 shots, but the Oilers' chances didn't seem all that great.
-Roloson allowed 4 goals on 24 shots....very un-godlike...
-Sportsnet had 3 good quips about the Canucks' 'drilling' of the Oilers tonight:
From their site:

For the Vancouver Canucks it felt like a Swedish massage. But for the Edmonton Oilers it felt more like a deadly one-two punch.


Great stuff!
-A big thank you to the Black Hawks, who beat the Flamers in a shootout, only allowing Calgary one point in the loss. Hey, how about Huselius getting too damned fancy in the shootout for the Flames' first shot and then the Hawks burying Calgary after that! Way to go...Widget!
-Also, a big thank you to Dallas for defeating the Wild in regulation tonight.
-The night almost could not have gone any better for the Canucks. 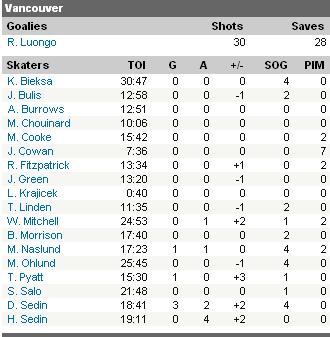