The Eastern Conference Jams Up

Share All sharing options for: The Eastern Conference Jams Up 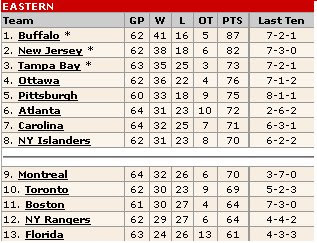 Saturday night's results only made the rat race for final playoff spots in the East all that more intense.
-The Canadiens are in a slump that may only be cured by a blockbuster trade before the trade deadline on Tuesday. I'm sure Bob Gainey's panic meter just hit flashing red.
-The Leafs refuse to quit. They played a decent game against Philly tonight and whooped them 5-2. But let's be honest here. They still lack a consistent and effective team defence which may bite them in the ass once again. The best way for this team to break this inconsistency would be to get rid of the inconsistent players on the team. That means you, Bryan McCabe. Perhaps an early return by Mike Peca, a defensive specialist, can produce a hot streak in the last 10 games and get this team back on track.
-Speaking of inconsistent, the Bruins are in the same boat. They looked promising recently, but then get blown out 7-2 to the Panthers last night. This team is not quite there yet.
-Speaking of the Panthers, now they are only 9 points out of a playoff spot. Does this make them sellers at the deadline? Not necessarily. Perhaps Gary Roberts isn't going anywhere after all...perhaps.
-The Islanders are surging now and are no longer a joke. Their success has hushed the hecklers like myself from last summer, especially with the whole Charles Wang/Garth Snow fiasco. Ted Nolan is either top 3 or is the Coach of the Year so far.
-Atlanta's mega slide is proof that they over-achieved this season. And that they play in a shitty division. I still can't figure out why they did nothing to replace Marc Savard and left a gaping hole at the #1 center position.
-The Rangers have no excuse to be in 12th spot. When I read about Jagr not wanting to participate in shootouts, it answered my question in a sense. Jagr has 5 points in his last 6 games. He needs to have 10 or more points in that span. As well, the Rangers had won 3 in a row until Shanahan was injured. They then lost that game to Philly, and have won only one game in the last 4 games since that incident.
-Just my opinion, but it wouldn't suprise me if the Penguins go on a losing skid and miss the playoffs. This is due mostly to the fact that they are such a young team still.