Diver Crosby gets no love in Montreal, or from me

Share All sharing options for: Diver Crosby gets no love in Montreal, or from me 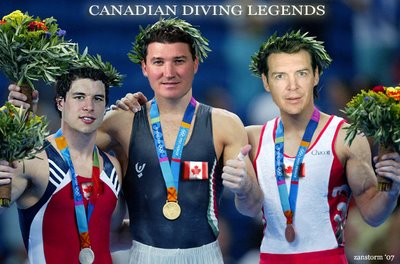 Numerous 'no calls' and a relentless "faker" chant from the home crowd may have severed the final string in Sidney Crosby's boyhood allegiance to the Montreal Canadiens.

"I grew up liking this team," Crosby said. "My like for the team has probably changed since then. But they're passionate fans. It's a road game."

After pleading with referees in Sunday's loss to the Habs, Crosby was ruthlessly booed by the raucous home crowd, and he was later called out by tough guy Aaron Downey for embellishing a high-stick in the third period.

"He told me not to go down. I said, 'If you get a stick in the face we'll see how tough you are. See if you don't go down.' It's funny, you get a high stick and you're not supposed to go down anymore," said Crosby, referring to a conversation with Canadiens winger Aaron Downey after Bouillon's high stick.


(Uh oh, RC, you better remove that Crosby jersey from your sidebar! :)

Crosby gets no love from me. He may have a point in the Downey incident, but he's missing the whole point. The point is that Crosby is a diver, a bonafide Mario Lemieux twin and it's pathetic. It's gutless, cowardly, and lacks class. The refs see it too much from Crosby and are probably less inclined to believe anything has happened to him when his arms go up in the air and he falls over. Referees will not tolerate having their integrity questioned by Greg Louganis-types, not even from Crosby. Hey, even Ron MacLean, who ref'd a Pens game in pre-season said after Crosby fell to the ice: "No penalty! Dive!"
This is the same reason why I never liked Lemieux. Theo Fleury could have been the worst diver of them all, but at least he played an aggressive gutsy game to go with it, despite his size!

Maybe the Pens need to acquire a bodyguard for the 5'11" 200-pounder, because he's obviously too 'small' to defend himself.
I have no respect for players of Crosby and Mario's size playing like they are/were 150 pounds soaking wet. It's lame. It's pathetic. If they want to dive, maybe they should try out for the Olympics, because it should never have a place in the NHL.
Can you imagine being an official during Penguins games? It's already difficult enough to call the game down the line with all the new rules. Why would you want to add 'deciphering a dive' to the list? Just my opinion.