Didn’t we just do this?

Share All sharing options for: Didn’t we just do this? 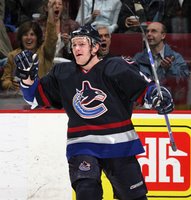 The Oilers are like the bad guy in the final scene of what's likely a crappy movie you catch on cable when you're bored. The hero (think Bruce Willis in Die Hard) shoots the bad guy (think Bruce Willis in The Jackal) directly in the face, he falls down a flight of stairs, crashes through a window and lands on the lawn three floors below. Bruce goes to check on the woman he no doubt will plow during the credit roll (think Milla Jovovich in The Fifth Element) and the bad guy crashes through the side glass door with chicken wire to wrap around the hero's neck. Bruce (the good one) shoves broken glass through Bruce's (the bad one) neck and he slowly bleeds to death on some lovely kitchen floor tile. Bruce (yes, the good one) strolls off into the sunset with Milla in one hand and a cigar in the other while Bruce (yes, the bad one) flicks open an eye and growls...presumably at the shard of glass in his throat. Or the fact he doesn't get Milla and, yes, we understand this pain all too well.

So yeah, why won't the Oilers just go away? Oh right, because we're in the most ridiculous division in the damn league. Somehow the Oilers can lose all of December and be within striking distance of the Luongnucks. Seems about right.

On the plus side, the Oilers are useless on the man advantage against the Canucks (1 for 34 on the season) and have lose three straight since humiliating Sabourin some time ago. On the negative side, the Canucks sucked against the Flames on Saturday and lost out in the valuable Sean Avery sweepstakes. Damn you Sather, you win again.

At any rate, both teams will beat the shit out of each other again. Assuming the Oilers play with more anger in their strides, this goes to OT or a shootout in which Vancouver wins. The Oil will be happy with a point, the Canucks will be happy with the extra one.