Darcy Tucker will stay in Toronto

Share All sharing options for: Darcy Tucker will stay in Toronto 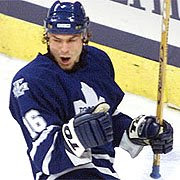 According to TSN, Tucker and the Leafs have tentatively agreed to a 3-year deal that will pay him an average of $3 million per season. So it is probably an escalating contract that pays him more each season. A 4th year is also part of the package that would save the Leafs money if Tucker would waive his no-trade clause.
What the Leaf really need now is for Tucker to return soon from his foot injury.