Share All sharing options for: D-Day has come and gone: Ryan Smyth traded! 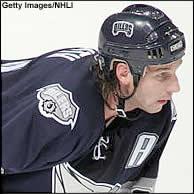 1:48
Poor Mike Keenan has been getting zinged all day. The last one:
KEENAN (angrily): "I just don't get why the Panthers didn't sign Bertuzzi when he was healthy."
TSN Panelist: "Because the GM changed, Mike!"

1:44
I wouldn't say that the Red Wings 'won' at the deadline. If anything they added major risks to their lineup. These deals do not 'put Detroit over the top'. Bertuzzi is a liability not only physically, but emotionally as well. He is a moody player who can take bonehead penalties at bad times, and he is a floater. Think they'll let him float in Detroit? Hey, Bert, welcome to defence school!

1:14
Funny, Senators GM John Muckler just said to TSN that he didn't think Gary Roberts was worth a 1st round pick. Nice work, John. I guess Oleg Saprykin was the better answer?!

1:13pm
Spector is saying that the Pittsburgh Gazette mentioned that

the Penguins were planning to send a fourth-round draft choice to Florida for defenseman Joel Kwiatkowski and a seventh-rounder to San Jose for minor-league goalie Nolan Schaefer.

12:58
The Blues have apparently traded defenceman Dennis Wideman to the Bruins for Brad Boyes. Whoa.

***UPDATE** Ryan Smyth was traded to the Islanders for Ryan O'Marra and the Wizard Robert Nilsson and a 1st round pick.confirmed. O'Marra was a 1st round selectio by the Isles in 2005. With Eerie and Saginaw this season in the OHL, he is scoring at a point-per-game pace.
Robert Nilsson is the son of former Oiler Kent Nilsson. He was the 1st round pick of the Islanders in 2003. He has 45 points in 50 games with the Tigers of the AHL this season.
The GM's are angry, says TSN, because Ryan Smyth was not auctioned off to them and only to New York. I'm sure the Oilers ran out of time trying to sign Smyth before 3:00 est to auction him off.
Poor Kevin Lowe may be butcherd for this, as Smyth was a franchise player and the Oilers were not too far from a playoff spot. Like the TSN guys said, Lowe did not feel Smyth was worth that much. Jeeziz, GM's have a tough job to stay under the cap don't they? His acquisition of 3 first rounders (past/present) was good though.

12:29 RYAN SMYTH HAS BEEN TRADED TO THE ISLANDERS!!! THIS IS WHAT TSN JUST REPORTED. Kevin Lowe just couldn't get a deal done with Ryan Smyth. Unreal. The Islanders are making a go for it.
No more seeing Ryan Smyth crashing the Vancouver crease for a long time!
This rumor was heard from another team by Gord Miller from TSN. It's pretty much done tho. Probably Ryan Smyth for Jason Blake and high picks.

12:27 UPDATE! Norstrom went to the Dallas Stars. Wow. That Dallas back end is absolutely insane.
12:26
I still can't believe that nobody picked up Petr Cajanek off waivers today. Cajanek has 34 points in 54 games this season. He must have issues I don't know about.

12:17
There is still no reports of anymore deals processed by the NHL office just prior to the deadline.
I don't mind the Leafs' acquisition of Yanic Perrault for the 3rd time. He is he best face-off player in the League over the past few years, he's defensively responsible, and he's familiar with some of the guys in the locker room. Perrault proved his worth by coming into Phoenix and making a serious impact on that team when he first arrived there earlier in the season. He took part in the Allstar Game as a result.

12:03
TSN did report that Scott Parker was sent to the Avalanche for an unspecified draft pick

12:00
Even though the deadline has come and gone, there still could be some announcements of deals that happened just prior.

11:38
Ottawa acquired Oleg Saprykin and a late-round draft pick from the Coyotes in exchange for a 2nd rounder