Could Forsberg come to Toronto?

Share All sharing options for: Could Forsberg come to Toronto? 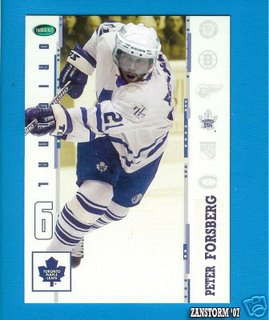 I drool at the possibility of Forsberg signing with the Leafs, staying healthy, and playing with fellow countrymen Mats Sundin and Alex Steen down the stretch and perhaps in the playoffs. Sundin and Forsberg have never played with eachother on an NHL team. They came close. Forsberg played his first year with the Quebec Nordiques in the '94-95 season, the same year Sundin started his tenure with the Leafs.
Is it at all possible? The Leafs, from what I'm gathering, are at about the $41.9 million mark under the cap. Knock off Peca's salary at $2.5 million, and there is a bit of cash floating around in Leafland to absorb half of Forsberg's $5.75 million salary.
So yes, it is possible. But that depends. Will they sign Tucker at a higher price before the deadline? If yes, then no Forsberg. How are the Sundin negotiations?
Can we assume that John Ferguson Jr is smart enough not to sign an injury-prone Forsberg and roll the dice at such a critical time? No..see the signings of Jason Allison and Eric Lindros last season.
Either way, it's something that I could fantasize about. It also gave me an excuse to put Forsberg's head on top of Robert Reichel's on a hockey card! That gave me great satisfaction!