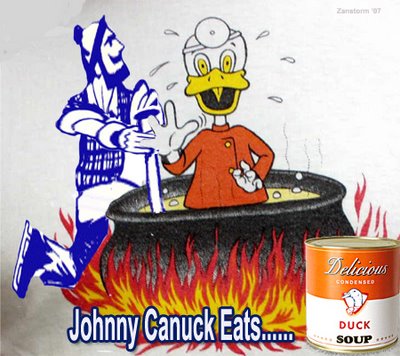 The Canucks begin a 4-game road trip tonight against the Ducks, who are now only 7 points ahead of Vancouver in the West, in 2nd place. The Ducks suprisingly have lost 5 of their last 8 in the month of February. The have lost 12 of their last 19 games since the beginning of 2007. What the hell is going on in Anaheim?
The Canucks are a different story. They have won 7 of their last 8 since the beginning of February, and 15 of their last 20 since January 1st.
The Ducks and Canucks have played twice this season, with the Ducks winning both games: 6-0 on November 9th, and a 2-1 on November 30th. The Canucks were outshot 57-44 in those 2 losses, and Luongo was pulled in the 6-0 loss. Ryan Getzlaf had 3 goals in those 2 games.
Chris Pronger, who was hit in the chin with a slapshot last night (vid), unfortunately will play tonight.
Todd Marchant is waiting for MRI results on his injured abdomen.
On the Canucks.com forum, Eklund's love child is saying that Dany Sabourin will get the start for Vancouver tonight. He is saying that he can be kicked off the forums if he (and his 'sources') are incorrect. Oh gad. I hope he's wrong. It wouldn't make sense to play Sabourin, unless they were trying to trade him, or if Luongo has a minor injury. We know Luongo isn't tired, for God's sakes!
----Update----
Sabourin will play tonight.

My prediction:
Because Sabourin plays: 5-2 Ducks, Earl Sleek wins a T-shirt!
So ignore the Photoshop.... I don't trust Sabourin's skills yet!
To completely get this Sabourin thing off my chest, I still don't understand what Vigneault is thinking. Why not start him on Thursday against the Kings? It's either:
A) Luongo is nursing a minor injury
B) Luongo needs a rest (not likely)
C) Vigneault caught wind that Mike Wall is playing in goal for Anaheim (uh..)
D) Sabourin is being given a chance to prove himself. If he does, he stays. If he stinks it up bad, Nonis acquires Brian Boucher (for example) in a trade, and puts Sabourin on waivers.
E) Vigneault thinks the Ducks suck bad enough to put Sabourin in.
F) All of the above
G) Some of the above
H) I need a drink!