The Canucks have to treat tonight's game as a must win

Share All sharing options for: The Canucks have to treat tonight's game as a must win 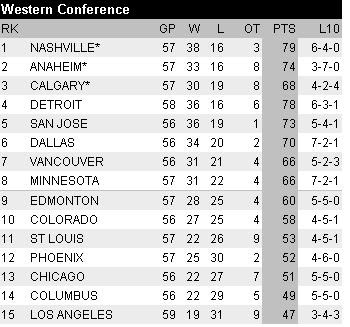 As you can see the times are crucial for Vancouver right now. Had the Oilers not lost to the Bruins last night, it could have been worse.
But the Flames pulled ahead in the Northwest with a 4-1 win over the Thrashers last night, and the Canucks need to chase that top spot in the division and stay on pace.
The game tonight against the Wild should have a playoff-like atmosphere. Both teams are tied for 2nd spot in the Northwest.
We can't think of the Oilers as 'finished' being 6 points behind. But it won't hurt us if they wallow in .500 mediocrity like they have in their last 10 games.
The Canucks are 1-3-1 against the Wild this season, and 0-2-1 playing in Minnesota. If there ever was a time to change a terrible stat it would be NOW.
Including tonight's game, the Canucks and Wild play 3 more times. A sweep by Vancouver would sure be nice.
To be positive, we saw great things from the Naslund-Moran-Reid line. If Viggy keeps them in tact, they will counter-attack Minnesota's speed very well. It is mandatory that they do so.

INJURIES
Wild- Manny Fernandez is out still with a sprained left MCL.
Brian Rolston had a stomach virus but is only day-to-day. Hopefully someone poisons his soup this afternoon.
Canucks-Lukas Krajicek will return tonight from his mild concussion. Alex Edler was sent down yesterday.
Kesler is toast.
Jan Bulis has a bruised shoulder. I hope he doesn't return. I like the look of Moran and Reid with Naslund.