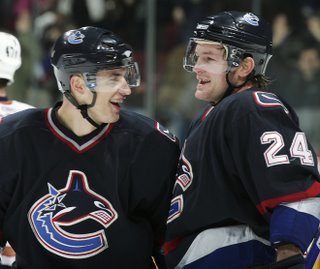 Well, kudos to the Oilers for their effort in this one, but...nah! The Canucks were the better team and deserved to win this one. Just when it looked like the Oilers could tie this one 3-3 on a late goal by Joffrey Lupul with 36.6 seconds left, Jan "sniper" Bulis sealed the deal with an empty net goal with only 17.7 seconds left in the game.
Markus Naslund, who was great tonight, had this to say:

"You can't emphasize enough how important these games are," Naslund said. "I didn't think we were as sharp as we have to be, especially late in the game, but overall we battled hard and I think we deserved to win."


And that was true. The Oilers got their bounces tonight, but the Canucks had more bounces at more opportune times and shut the Oilers down to preserve the win.
How important was this win? HUGE. The Canucks not only put themselves 8 points ahead of the futile Oilers, but they also gained 2 points on Calgary for 1st place in the Northwest Division.
A few other points about the game:
- How about Marc Chouinard scoring the 3rd Canuck goal to make it 3-1 on a 2-man breakaway??!! I didn't see that coming...But he sure looked poised after he settled the puck down.
-Naslund, who I will butcher at any chance I get, had a great game tonight, scoring 1 goal and adding an assist. His goal showed some unusual confidence, as he charged past a sprawling Bergeron on a 1-on-1 battle and scored on Roloson. Did Nazzy show any sign of relief? Nope. Not even a smile out of the Canucks' captain.
-Jan Bulis, however, looked happy as shit to score an empty net goal. He smiled all the way to the bench, like the weight of the world was lifted off his shoulders.
-Luongod wasn't great tonight, but he was good.
-Nice to see Mitchell back. His leadership is valued no doubt.

1. Markus Naslund
2. Marty Reasoner. A gritty game with 1 goal and 1 assist. Reasoner was the best Oiler hands down.
3. Marc Chouinard- For his PK efforts and breakaway goal.

Remember what I said about how well the refs called the game against Columbus? Well, the refs tonight, led by Kerry Fraser, called 14 damned penalties, 7 each.