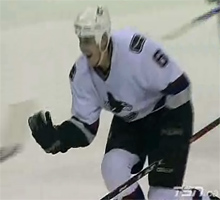 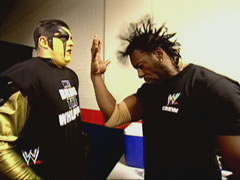 Sami Salo did his best Booker T imitation after scoring the winning goal in OT against the Wild last night as if to say "Three time, three time, three time!" As in he has scored 3 winning goals in OT this season for Vancouver. Salo took a pass from Matt Cooke on the rush, blew by the Minnesota D, and roofed a perfect back-hander over Niklas Backstrom with under a minute to go in the extra frame. Did we really want to take our chances against Rolston, Demitra and Gaborik in the shootout? Err, no damned way.
A few observations:
- It was the playoff-type atmosphere that was expected. However the game was more wide open and exciting than was expected. Both teams were skating hard.
- I am suprised that there were so many odd-man rushes against both teams, who are usually defensively sound and controlled.
-Luongod may have made the more scintillating stops, but Backstrom played super as well. Final shots were 34-32 in favor of Vancouver.
-No Jan Bulis, no complaint from me! I liked how Brad Moran and Brandon Reid looked again tonight. Moran was getting time on the top PP unit with Naslund and Morrison, but both guys played just over 14 minutes.
-Unreal. Trevor Linden gets a breakaway chance and Backstrom stoned him. The Wild score minutes later to tie it 1-1 and you had to think..."oh no". But the Sedins and Pyatt have a terrific shift after the tying goal and score about 17 seconds later. That was huge.
-The exchange between Bieksa and Gaborik was hilarious. First Bieksa decks Gaborik in to the boards, and seconds later, Gaborik suprises us by levelling Bieksa behind the Canucks' net. I didn't think Marion had it in him!
-TSN and Eastern Canada have a love affair with Luongo lately. I wonder if it's because Montreal and Toronto are tanking it in recent weeks....(random thought)
-How skilled are Gaborik and Demitra? Those guys are bloody dangerous. Thankfully Rolston wasn't as much of a threat as he usually is.
-How the hell could Niklas Backstrom be the 2nd star? He lost the game! He faced only 2 less shots than Luongod. 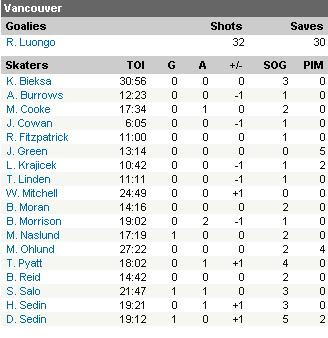