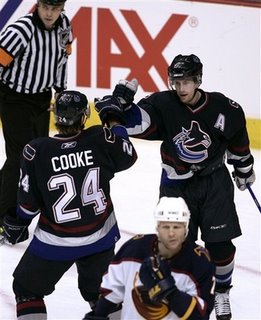 The Canucks won 3-2 in a thriller tonight. Sure, the Thrashers came back near the end of the 3rd, but let's be realistic here: The score should have been about 7-2 in this one. The Canucks owned the Thrashers for 2 and 1/2 periods, outshooting them about 28-19 in that time span. Did Luongod have to be great? Nope. The
Nucks neutralized Hossa and Kozlov for the most part. Kovalchuk had his chances (8 SOG) and scored Atlanta's 2nd goal late in the 3rd period on the powerplay( after a bogus tripping call on Matt Cooke, who was trying to sweep at the puck, not trip the guy) but aside from that, the Canucks did a fine job in shutting down the Thrashers for the win. Sure, they were coughing the puck up in their own zone in the 3rd (especially Ohlund) but it really doesn't matter.
The Thrashers failed to show up until it was too late.
-How do you like the play of Brad Moran and Brandon Reid? They had alot of jump playing with Naslund (a brilliant move by Vigneault). But they need to work on their defensive game, methinks. Bulis and Chouinard sat in the press box tonight.
-Actually, the Naslund-Reid-Moran line started the game on fire and really set the tone in this one.
-Jeff Cowan is full of energy and was a great acquisition by Nonis.
-The same can be said about Josh Green.
-Did anyone else see Markus Naslund 'SMILE' at the end of the game as he congratulated Roberto Luongod? Wow. He f***ing smiled!
My 3 stars:
For once, I agree:
1. Brendan Morrison. 2 goals.
2. Markus Naslund. 1 goal.
3. Ilya Kovalcrap. 1 goal and was the best Thrasher, period!
BOX SCORE 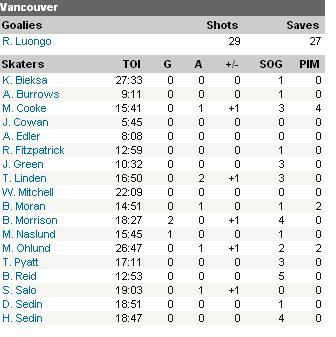 Later today, I will talk about the Gutless Flames Weasel, Kristian Huselius.