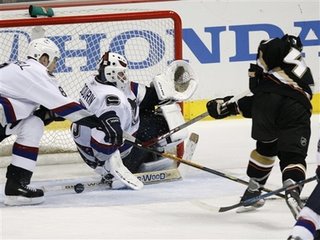 This was a close one no doubt. Dany Sabourin looked steady tonight, flashing out his pads to stop anything along the ice. The Canucks played well in front of the inexperienced goaltender for the most part, even though they were outshot 33-22. Sabourin saw most of his shots. But he really looked weak on wrap-arounds. Anaheim's first goal by Tim Brent was stuffed in after Sabourin couldn't control a wrap-around. It could have been worse. Another play was whistled down before the Ducks stuffed the puck into the net past Sabourin.
Other than that, Sabs played solid. He looked alive and alert in goal. But you would have to think that Sabourin is too small to be a bonafide NHL goaltender. He goes down in the butterfly position alot, and his lack of size leaves the whole upper portion of the net open. Fortunately the Ducks did not capitalize on that tonight.
The Canucks, who looked completely confident in OT (b/c they were 12-1 in OT this year) dominated the extra frame. Hank Sedin scored the winner after Salo blasted a shot wide and the puck bounced off the boards onto Hank's stick, who buried the winner. It was almost as if Salo knew the boards at the Honda Center were that lively.
Feel the love. Sabourin got his first win as a Canuck. You could see his teammates giving him taps on the mask after it was over. They knew it was a good thing. I don't mind being wrong with my prediction. Again, Vigneault looks smart. The Canucks came back twice to force this game into OT. It was a gritty effort.
Anyone else loving Naslund's little move around Pronger for the tying goal? A beauty! 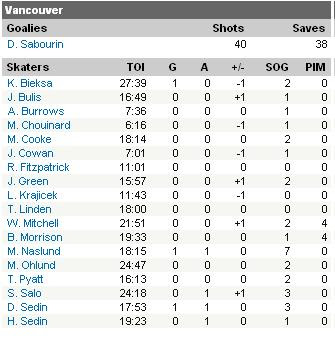