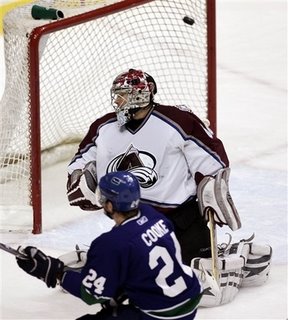 This game is intense so far, and is a far cry from the Canucks/Hawks game. Gone is the tight-checking New Jersey-style defence from Vigneault's club tonight.
The Avalanche look quicker than Vancouver for the most part, and are winning most of the battles for the puck. Hell, they are outshooting Vancouver 28-17 after 2 periods. Luongo has been pretty good, and cannot be blamed for any of the 3 goals scored on him.
This game must feel like a nightmare for Vigneault and perhaps even Joel Quennville, as it resembles a game that really could end up being 7-6.
The bottom line is that the Canucks need to put together a solid effort in the 3rd period, score the winning goal, and shut down the explosively quick Avalanche offence. But it's like I said earlier, the Canucks have had a hard time doing that all season long against the Avs. Well, in the words of Han Solo: "Here goes nothing!"
------3rd Period-----------

I don't believe it! Hank Sedin scores right away, assisted by Ken Klee!!! 4-3!
Holy shit: Arnason goes in the box, and Morrison scores after a great feed by Naslund! Does Cooke have 3 points already?!
-OK, time to sober up..Laperierre scores a beauty..great pass from Arnason. Oh shit, the Avs are pressing! 5-4!
-Alas, the Canucks held the Avs at bay, shut them down, and won this game 5-4. 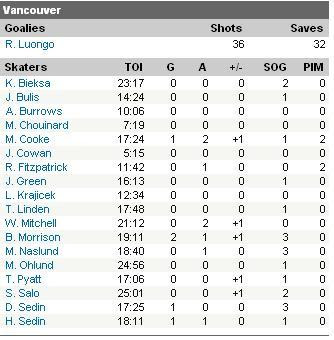