Share All sharing options for: Canucks 2 Hawks 1 (SO) = yawn 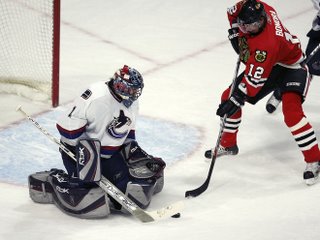 I think Roberto Luongod said it best after the game:

''It wasn't our best effort, but we got two points out of it,'' Luongo said. ''It's a good sign when we can play that way and still get the two points.''

Well, Roberto, your effort was absolutely brilliant once again, and you gave a flat Canucks team a chance to win it.
Luongo made key saves, as the Hawks outshot Vancouver 35-29, including 16-6 in the 3rd period. Key saves included: the impossible glove stop on Dennis Arkhipov early in the 1st, and on a Havlat breakaway with 1 second left in the 3rd after Jan Bulis coughed the puck up at the Hawks' blueline. The score was 1-1 at the time. Can you imagine if Havlat would have scored? We would have called for Bulis' head on a platter, more than we already do!
I am still perplexed in a sense that Vigneault sent Brad Moran back down to Manitoba and inserted Bulis back in to the lineup. The Naslund-Moran-Reid line created alot of energy over the Nucks' past 2 games, something that would have been appreciated last night, as the Canucks were out-skated by the Hawks. All we can hope for is that Bulis gets moved by the trade deadline, regardless of the fact that he shows hustle on most nights. I think we should send him to Chicago for Smolinski!
Luongo then shut the Hawks out in the shootout, while Trevor Linden and Brendan Morrison scored shootout goals to seal a win.
Why can't Vancouver get up for games against non-playoff teams? They played even worse against Chicago last night than they did against them last week, and they STILL got the win.
Tommi Santala, who was called up on Thursday, never played last night. Trevor Linden, who was questionable for last night's game because of a sore foot, played 18:51.

Nice play by Martin St. Pierre on the Hawks goal. He shot the puck at Luongo from the faceoff circle, Luongo let out a rebound and Patrick Sharp buried it. Great play!

Patrick Lalime did not have to be great this time at all! 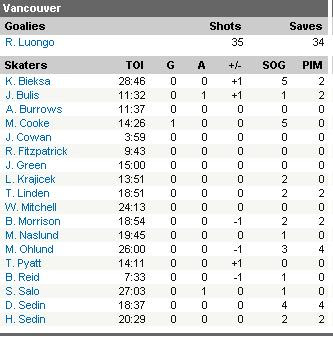