Share All sharing options for: Brian Burke's thoughts on the instigator rule 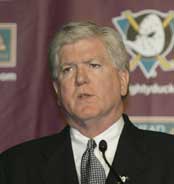 With the current rules, a player who picks up 3 instigator penalties is penalized with a 2-game suspension. This topic was discussed by NHL GM's today (day 1 of 3). Brian Burke had this to say:

''That's an agenda item that I requested,'' Burke said after the first day wrapped up. ''I think we need to raise the number of instigator penalties a player can take before getting suspended. I do not favour the elimination of the penalty but I think we've got to get to five or six before a player gets suspended so they can do their jobs and protect their teammates."

I think Burke's idea is a step in the right direction, but in my opinion, it's only half-way to what I'd like to see, which is the elimination of the instigator rule altogether! Stop being wimps! Bring back the goons!