Blues 3 Canucks 1: Where is the intensity?

Share All sharing options for: Blues 3 Canucks 1: Where is the intensity? 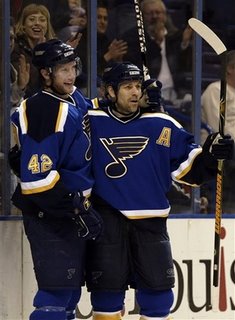 "It's tough," Weight said. "Two of my great friends and a big part of our success we had are those guys. (Guerin and Tkachuk) It was important to get back on the winning record, especially against this team which had been playing so well."

Tonight, the Blues played with desire. The Canucks once again did not skate hard and match the opposing team's intensity, losing 3-1 to the Blues. You could say that this game should have been an easy one, but that isn't the case, as the Blues are 17-8-2 in their last 26 games. They played a pretty good game despite the fact that they had just lost Tkachuk and Guerin.
Once again the Canucks got into penalty trouble at the end of this game, as Burrows and Dan Sedin took tripping penalties nearing the end of the 3rd period. Doug Weight scored his second goal of the game on the PP, (the Blues' 3rd goal) with only 2:14 left in the 3rd period. But the problem with the Canucks originated with them not skating hard enough. Sure, they outshot the Blues 18-9 after 2 periods with the game tied at one. But they did not get enough quality scoring chances on Curtis Sanford, who is now 5-0 against the Canucks. Most of Vancouver's shots were from the perimeter, trying for a tap-in.
How did Smolinski and Sopel play? Smolinski looked lost out there, but he needs some time. Sopel needs time as well. It seemed to me that he was playing that old Canucks style from previous years. Yeah, that 'out of position' style. He will adjust in time.
How did Tommi Santala play? Like shite. He looks nervous out there sometimes, and cannot capitalize when the Sedins set him up. Why is Santala any better than Brad Moran or Brandon Reid? Hopefully Pyatt comes back soon.
There is no need to panic at this point. The Canucks' lack of intensity is a concern, but will only be temporary I'm sure. They have only lost 3 times since December 22, and were on a 6-0-1 streak. I say it's time for a little adversity. In fact, it would be good for them to slump a little, and then get their shit together in the last 5-10 games before the playoffs. Right now it seems like they are playing like spoiled brats..like they are almost 'tired' of winning and taking things for granted.
I bet Montreal, Edmonton and Toronto wish they had the same problem! 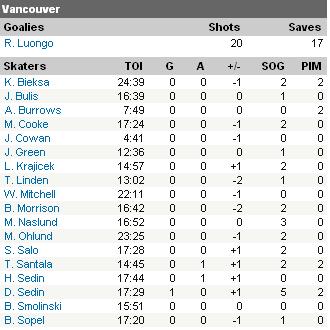