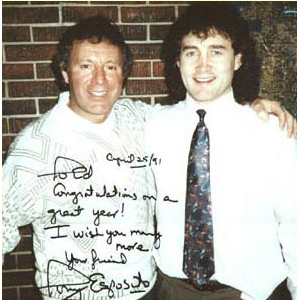 When Eddie the Eagle made 24 stops in a 1-0 win over the pathetic Habs last week he recorded his 76th career shutout. This feat ties him with Tony Esposito for 8th on the alltime list.
Is this a big deal? To me it is. These are my 2 favorite goalies of all time! I'm sure it's a big deal to Eddie as well, who idolized Esposito growing up.
Here are a few quick facts about Belfour:
- Mike Keenan gave him the nickname "The Eagle" because the first mask that Eddie wore as a Hawk had eagles on it.
- Belfour wears #20 in honor of Vladislav Tretiak, who was his goalie coach in Chicago.
-Belfour is 3rd on the alltime goalies win list, behind Martin Brodeur and Patrick Roy.
- Belfour has won 4 William Jennings trophies
- Belfour has won 2 Vezina Trophies, Esposito won 3.
- Both Belfour and Espo won the Calder Trophy (1991 and 1970)
- Stanley Cups: Belfour: 1 Espo: 0 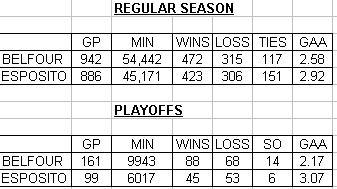 Esposito and Belfour pic is from Belfour.com