Share All sharing options for: Anson Carter to Carolina 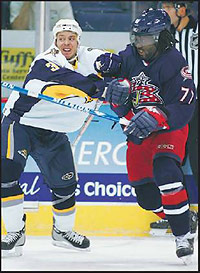 Thanks to Hodge for the tip.

Carter has been traded to Carolina for a 5th round pick in 2008.

''Anson is a veteran NHL player who has had some good goal-scoring years in his career,'' Hurricanes general manager Jim Rutherford said in a statement. ''He will help strengthen our forward corps at a much needed time.''

A much needed time indeed. Carolina needs a boost, as they are clinging to 8th spot in the East by only 1 point ahead of the Islanders, 2 points ahead of the Leafs, and 5 points ahead of the Rangers. The Canes are 5-4-1 in their last ten and are in danger of missing the playoffs altogether.
That seems like a steal for Carolina, but Carter has lowered his own value by playing sub par hockey this season. He only has 10 goals and 17 assists in 53 games this year and was not fitting in well with Columbus. I think he will find more success in Carolina. However, Carter will now be Carolina's problem at the end of the season as he becomes a free agent in the summer. He is currently making $2.5 million in his one-year deal. Carolina will only have to pick up about $601,000 of that.This ends the talk of Carter returning to Vancouver. Sure, it would have been great to see him on the Sedin line again, as 54% of WFS readers attested to on the Carter poll on this site, but this speaks volumes about how the coaching staff feels about Taylor Pyatt on that line. Pyatt is fitting in well.