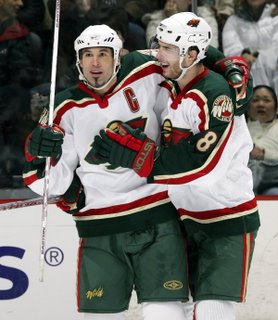 The Wild, who had not won on the road for about 2 months, took advantage of a Canuck team that was slow out of the gate tonight. The Wild had not won on the road in 11 games. The Canucks had not played for 4 days, and it looked like it. Minnesota came out skating hard, 'forcing' an early (and very questionable) penalty call on Naslund. The Canuck-killer Marion Gaborik scored on the ensuing powerplay.
9 minutes later, the Wild scored again on a goal by the other Canuck-killer, Brian Rolston. The Canucks only had 6 shots in the opening frame to the Wild's 15. Their chances were superb, but Manny Fernandez made spectacular saves.
After Branko Radivoyevic scored 4 minutes into the 3rd to make it 3-0, something clicked in the Canucks' collective skulls. They finally started getting their legs under them, and rallied for 2 goals by Babyface and Willie Mitchell, his 1st as a Canuck.
Ah, the emotion was high. The Canucks were coming back! They were going to extend their streak... but early in the 3rd period, that damned Gaborik salted it away on another rebound goal to make it 4-2. That pretty much halted the Nucks' energy and momentum, and Wes Walz steamed in past Ohlund to score at 13:37 to make it 5-2.

-I believe the Canucks are 1-3-1 against the Wild this year. The Wild are usually a pain in the ass for the Canucks to play against.

-Loved seeing Bieksa blow by the Wild D and get a great scoring chance, and then skate back to his own zone and level Gaborik all on the same shift. It's too bad he didn't take Marion's head off completely.

-Mark my words, Kevin Bieksa is going to be a Norris Trophy finalist or winner in the future. He played almost 26 minutes tonight, had 1 assist, and was a -1.


-Who was the ref who called that early penalty on Naslund? It was a BS call and it only added to Minnesota's momentum and set the early tone of the game.

-Trevor Linden, who played over 14 minutes tonight, looks like the Linden of old.

-Jan Bulis' little deke away from the boards to set up the Pyatt goal was a thing of beauty. Then he disappeared again into the shadows.

-Does Alex Edler have a 'hit me' sign on his head? Yeesh. He sure gets cranked alot. I'm wondering if it's because he stops skating.

-This loss didn't sting too much did it? Especially not after a 7-game winning streak. I guess the real stinger is the fact that the Canucks dropped to 7th in the West tonight and the Flames took over 3rd and 1st in the Northwest.

-On a side note, at the beginning of the season, I would have bet both of my legs that Colorado would not be in last place in the NW at the half-way mark of the season. Wow.