What the hell is going on in Phoenix???

Share All sharing options for: What the hell is going on in Phoenix??? 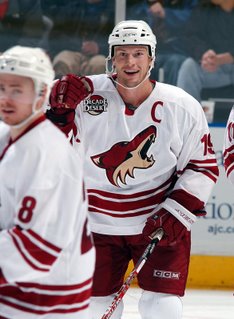 Great things, yes, great things. The Coyotes have pulled off the improbable and won 7 in a row. Shocking. I figured I'd do a little math and show you some stats about Phoenix's win streak.

During the 7 straight wins:

Unreal. Too bad almost every single one of those players are inconsistent. Once their hot streaks end, Phoenix should go back to sub-par play.

The Dogs have outscored their opponents 30-12 during the streak.

During those 6 games, the Coyotes have been outshot 217 - 180 by their opposition. This speaks volumes about the play of Cujo and Tellqvist!

The Coyotes are are back to .500 and are 3 points out of 8th spot in the West. Gretzky officially has less bags under his eyes.