The Pipes Are Calling

Share All sharing options for: The Pipes Are Calling 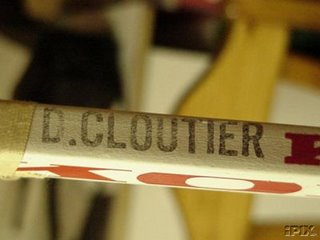 I have to admit, it's very hard not to dump on Dan Cloutier whenever possible. I recognize it's in poor taste and generally not fair to a guy who put together some respectable seasons in Vancouver but suffered biblical meltdowns in the post season. So while it's not really fair to wish him ill-will or take heart in his piss poor play in LA this year, he did shit the bed when this team had a legit chance to make it to the conference finals so I can hold a grudge. All that drinking and cheering to watch them lose to the Wild who then got swept by a toy Disney team who then got beat in 7 by the Devils in my own backyard who topped the entire thing off by blasting Bon Jovi as they received the cup?! Awful, awful, awful.

At any rate, seems like Cloutier's season just went from really bad to, well, par for the course for Danny boy:

Kings goaltender Dan Cloutier may be out longer than expected after getting a second opinion on his hip injury this week.

Cloutier, sidelined since Dec. 23 by hip and knee injuries, had his hip reexamined by a specialist in Colorado to determine the extent of damage. He will meet with team officials this week to decide on the best course of action, which could range from extended rest to surgery.

Kings officials do not believe the hip injury is career threatening. Cloutier, who signed a two-year, $6.2-million contract extension in September, is also suffering from tendinitis in his knee, believed to be caused by compensating for his hip injury.

I do hope he gets better...it sucks when a guy's health stops him from doing the only thing he knows how to do. See Peter Forsberg for more information on that.

Then again, let's pretend Danny has to retire. I, for one, won't remember him really for his goaltending abilities since he was average to good depending on the time of the season and/or the opponent. However, what he was known for was just being a feisty guy...and a goalie that was often times more fun to watch get angry then be the cool, calm and collected guy most NHL goalies are.