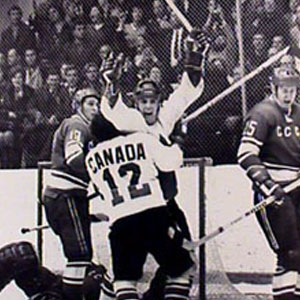 According to Sportsnet, Russian goalie-great Vladislav Tretiak wants to see another Summit Series.

Tretiak, who starred in goal for the former Soviet Union squad in the '72 series that gripped the hockey world, said Monday he hopes to propose a new eight-game event to NHL commissioner Gary Bettman.

"This year is important for us because 35 years ago we played -- four games in Canada and four games in Russia," said Tretiak, now president of the Russian Ice Hockey Federation. "I'd like to see us make eight games again.

"I would like to talk to Gary Bettman. Maybe a little bit later."


Tretiak and Gary Bettman were both in Montreal tonight to witness the retiring of Ken Dryden's jersey.
What are your thoughts? Would you approve of another series? Would it ruin or take away from the sacred Series of 1972? Obviously, nothing will ever compare to 1972, but you have to at least drool a little over the possibilities.
One thing is for sure: there won't be a Summit Series 2 if Russia keeps refusing to co-operate with the player transfer deal.