Share All sharing options for: Remembering the Odjick-Messier saga: What Gino said. 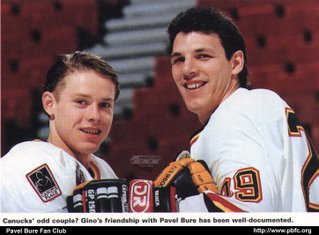 I'm posting all this Odjick stuff because of a great fansite that I came across. After reading the articles about the Mike Keenan-Mark Messier saga and what Odjick said after the Canucks traded him to the Islanders, I figured I'd post them for you. This is also inspired by Isabella's hate-on for Messier posts from yesterday and from her post entitled Decision 2006 from last September.

Never one to back down from anybody, new Islander Gino Odjick took on a heavyweight yesterday and delivered some crushing blows to a former hero of New York.

Odjick blasted his former Vancouver Canuck teammate Mark Messier in an article published in yesterdays Vancouver Province. He accused the ex-Ranger of running the Canucks into the ground by controlling everything from trades to the hiring of Mike Keenan as coach.

"He just wants to destroy everything," Odjick said, "so he gets the power. He didn't break a sweat for the first ten games and just waited for (former coach) Tom Renney and (former GM) Pat Quinn to get fired. He talkes to ownership all the time and he's responsible for Keenan, and he's part of most of the trades."

"Look what happened with (ex-Canuck and current Islander) Trevor (Linden) when Keenan gave him (hell). Did (Messier) come over to him and say, 'Look, Trev, were with you'? He didn't say a word. How can you be captain like that? How can the team be together that way? He's not with the players. He's the one who control everything."

"I don't blame Keenan for what's happened. Everything he does, he does in the name of winning. But everything ... Messier does is for more power. They signed him to help us, but all he wanted was most of us out of there so he could bring in his own people. He just wanted to tear it apart and do it his way".

Odjick was not available for comment, but Isle spokesman Chris Botta said Odjick stands by his remarks.


Now, think of where the Canucks are right now, and be thankful that they don't resemble the shitshow that they were in the late 90's! They've come a long damned way haven't they?