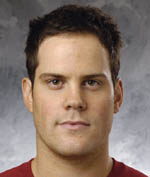 Cross check to Hodge for the scoop.
After losing out on Petr Nedved, the Senators have acquired the center that they have been wanting, with the absence of Jason Spezza and Mike Fischer due to injuries. Mike Comrie has 7 goals and 20 points in 24 games this season. Comrie, who I have found to be quite an injury-prone, overpaid enigma, is making $3 million this season, and will be a free agent in the summer. The 26 year-old, at his best, could score about 30 goals this season. In his NHL career, he has 110 goals and 237 points in 345 games.
Alexei Kaigorodov,23, the Senator's 2nd round pick in 2002, has only one assist in 6 games this year. I had forgot that he was suspended in November for refusing to report to Ottawa's affiliate Binghampton in November. The scouting report rates him as a good passer with great hockey sense. The knock on him is his speed and lack of aggressiveness.
So..headcase for headcase. 2 potential pains in the ass. With Comrie on the Sens, my hate for them just went up a notch.
In Comrie's defence, on a skilled Sens team with top line duty, he could flourish along side Heatley or Alfredsson. Oh right, and then sit out for a year because he wants a longterm $5 million contract. Oiler fans know that about Comrie.