Share All sharing options for: Leafs have less White and more Green 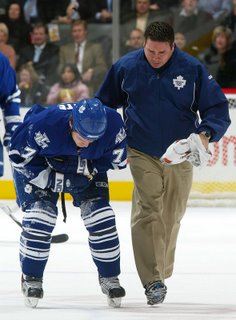 Ian White suffered a separated shoulder in last night's 4-1 loss to the Hurricanes, and will be out of action for the next 3-4 weeks. The injury occured when the Cane's Chad Larose hit White into the boards while both of them were chasing the puck for a potential icing call. White joins the increasing Leafs' injury list that includes:
Mike Peca (broken leg)
Darcy Tucker (foot)
Kyle Wellwood (groin)
Alexei Ponikarovsky (shoulder)
Nik Antropov (sprained ankle)
Andy Wozniewski (shoulder)

Will the Leafs be able to overcome these injuries?

The Leafs also claimed Travis Green off of waivers from Anaheim today. Green joins the Leafs for a 2nd time and is a welcomed addition to the Buds' 3rd or 4th line.

''To the say the least, I'm excited,'' Green told The Canadian Press. ''You look around the league, I don't think there's a team I would feel more comfortable coming to than Toronto. I loved my time there and I really look forward to it, hopefully getting a chance to help out in any way I can.''

It's good to have Green back, even though I hope the Leafs don't start bringing in too many veterans again!
Green was a part of the Leafs team that went to the Conference finals in 2002.