Share All sharing options for: Leafs are potentially doomed already 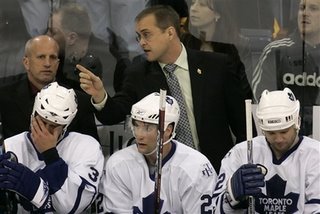 There is a lot of despair at the Battle of Ontario right now. The Leafs, even though they are 5-4-1 in their last 10, and are tied for 8th spot in the East, still do nothing on the ice that would make their fans sure of a playoff spot. I think the Muppet said it (almost) best in the comments section:

The Leafs right now are a team that needs everybody skating and everybody playing their absolute best if we have a hope. As soon as players take a night off, we get absolutely killed out there.

Sundin was invisible, McCabe (although he did fight), looks like Frankenstein right now with all the gashes and cuts, and he's playing like one too. Terrible. And Kaberle hasn't been skating the puck with the same authority either. These two need to get play better. Sundin needs to play better. Stajan, Steen... they need to play better. If Kilger is the only guy trying every night after the all-star game than we are finshed, if we aren't already.


Chad Kilger should be wearing the 'C' in Toronto. I haven't seen him take a night off all year. He backchecks, forechecks, and does it all, and has generally been a pleasant suprise this year, aside from his -11.
The Leafs no doubt miss Tucker, Peca, Wellwood, and White. But those injuries are no excuse for their current play. There is plenty of manpower in the current lineup to get it done. Perhaps Paul Maurice is beginning to realize that no coach can get this team to play team fucking defence. Raycroft was hung out to dry last night in their 8-2 loss against the Pens. Yet in recent past the Toronto fans boo the goalie.
It's time for a reality check. Maybe this current bunch of Leafs is not going to get the job done and play as a team, or stop taking boneheaded penalties. Maybe Bryan McCabe is overrated as is Kaberle, both of whom, in my opinion are terrible defensively and get caught up the ice way too often. Maybe Sundin should be let go, or get injured again. Maybe I won't even get started on Hal Gill. Maybe it's time to bring back this guy, who may be able to beat some sense into this group.
I think the New Jersey Devils of the West could teach this bunch a lesson: play hard every shift, play a solid team defensive game, don't take alot of stupid penalties in the face of adversity, and management needs to eliminate the ones that fail to comply.