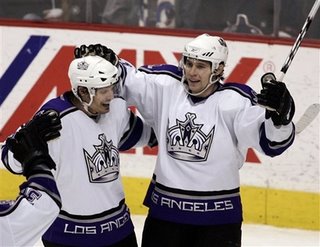 Alexander Frolov scored 1:38 into overtime to give the Kings a narrow victory over the Canucks. Marc Crawford will sleep good tonight.

"You don't want to make too much out of it, but sure, it's nice to win here," Crawford said. "You see lots of familiar faces and lots of friends and now they're our new foes so it's kind of neat. They've had some great success this year and we haven't, so from that standpoint it's always nice when you can one-up them."

That's nice Crow, but hey, f**k you! :) Even Sean Burke can rest well on his pillow tonight, being a former Canucks goaltender. He played well tonight and made key saves when most needed. He stopped 37 of 39 shots.
Roberto Luongo was nothing short of brilliant, but didn't get any support from his teammates. The Canucks came out flat tonight, after having a week off, and the Kings, motivated to win for their coach, took advantage of the situation, going up 2-0 on goals by Patrick O'Sullivan and Alex Frolov.
The Nucks came back as the game went along on goals by Sami Salo and Trevor Linden. But the Kings' pressure was too much to handle when the game went into OT, and Frolov capitalized on a rebound and scored on Luongo to finish this one.
Bottom line:
-The Nucks looked slow, unorganized, and out-hustled for too long in the early stages of this one. The Kings deserved the win.
-The Frolov-Kopitar-Brown line is deadly, make no mistake. Crawford has one helluva line there. Kopitar seems to be gathering steam and is poised to win a Calder Trophy as the Rookie of the Year.
-Luongo played his heart out, stopping 40 of 43 shots. Too bad his teammates didn't play the same way.
-Sean Burke, when motivated, is a good, capable goalie. Nice pick up by the Kings.

And sheeit, Jan Bulis may have been the best Canuck forward tonight....QUICK! Trade him while his value is high!!

Are we to expect a losing streak of some sort from the Canucks now?! Or will they rebound and play a better game out of the gate against San Jose on Sunday?