Share All sharing options for: Kessel may stay on Bruins' top line 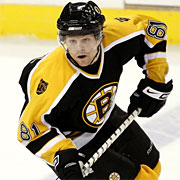 According to the Boston Globe:

In a move aimed at getting Bergeron's game going, Lewis bumped Shean Donovan off Bergeron's right wing in favor of rookie Phil Kessel. Marco Sturm remained on the left side. Bergeron played with much better jump and picked up his 32d assist of the season.


Prior to Saturday's 3-0 loss to Ottawa, Kessel had 2 goals and 1 assist in 2 games. His icetime is increasing to over 12 minutes per game, which is much improved over the 7 minutes he was averaging after returning from surgery.
Kessel told the Globe that he is feeling better, and that he is getting his legs back now. Too bad he gets a week off right after he started heating up. Hopefully, we will see the 19 year-old rack up the points playing with Bergeron starting on Saturday against the Sens. Kessel's rough year is turning into a positive one, and a great comeback story.