Share All sharing options for: Jackets beat Canucks in Shootout, 3-2 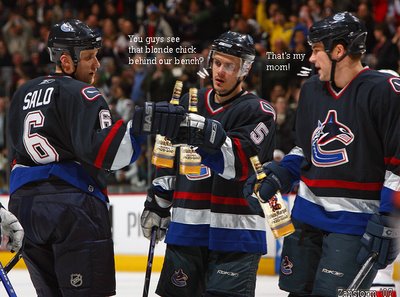 Anson Carter, who scored the first goal of the game 18 seconds in, said it best about the Jackets' 4 game winning streak:

"We're certainly not getting fat beating teams at the bottom of the standings," said Carter. "We're just competing hard and we're not turning pucks over in the grey zone areas and we're being strong in front of our own net.


The Canucks outshot Columbus 37-28, but fell short in this one. Whenever the Jackets' defence faltered, Ty Conklin was there to make the save. Ty Conklin? Yeah, Ty Conklin.
Good for him to rebound after that travesty and play well now.
Does anyone else think that Jan Bulis is showing the most effort these days out of all the Canucks?
Is anyone else getting tired of Markus Naslund's futile efforts? He almost scored a beauty on Conklin from the side of the goal, but ate the goal post instead. How much is he lacking confidence? The old Nazzy would have buried that chance.
I don't know what else to say about this one except that it could have gone either way. The Canucks didn't play terrible at all. They just couldn't bury their chances.
Only 4 penalties were called by the refs tonight. There was some hooking and interference going on, but they let the 2 teams play. The inconsistency from ref-to-ref needs to stop regardless. I would like to see all the refs call the game like they did last night. No chinsy calls, and there was still a good flow to the game. 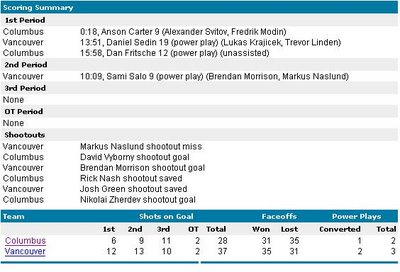