Is Tucker coming out West?

Share All sharing options for: Is Tucker coming out West? 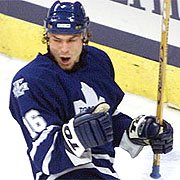 Sportsnet.ca -- With Calgary and Edmonton looking to bolster their lineup for a final playoff push, both teams are examining the possibility of prying Darcy Tucker away from the Toronto Maple Leafs.

According to the Toronto Star, both the Flames and Oilers are interested in the feisty winger, who has been out of the lineup since Boxing Day with an injury to his left foot. Still, according to the paper, Edmonton and Calgary are in "tire-kicking" mode with Tucker, who has also been linked to Dallas and San Jose.


Tucker is in the final year of his contract that is paying him $1.56 million this season. He has stated numerous times that he wants to remain a Maple Leaf. However, the raise he is about to get in the summer may not fit the Leafs' salary structure.

Anybody think Tucker would be a good fit in Vancouver?