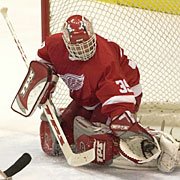 (CP) -- Dominik Hasek turns 42 at the end of the month, the latest sign that Father Time will soon force him to close out his stellar NHL career.

With that in mind, the Detroit Red Wings netminder has been quite public with his feelings of not getting a chance to play in next week's NHL all-star game in Dallas. It may likely have been his last chance.

"I was disappointed especially because I haven't played in it since 2002," Hasek said Tuesday from Detroit. "It's been a long time. It would have been a nice accomplishment to play in the all-star game again."

Calgary's Miikka Kiprusoff was a no-brainer to join Vancouver's Roberto Luongo, voted in by the fans, as the top two Western Conference netminders.


I think the Dominator has a point. Why is Kipper a no-brainer? HE hasn't been that stellar this season. Nor has Luongo. You could almost argue that Hasek has more of a right to be there than Luongo does! His numbers of 35 games played, 24 wins, .914 save percentage, 1.98 goals against average, and 6 shutouts is best in almost every category in the Western Conference.
One peculiar stat though, is for all of those 35 games he has played, he has only faced 789 shots! This total is 403 less shots than Luongo has faced (43 games-played), 376 shots less than Kipper has faced (40 games-played), 114 shots less than Giguere has faced (34 games-played), and 163 shots less than Marty Turco has faced (40 games-played).
How many fans took those numbers into consideration?
Does Hasek have a bad rap around the league and to fans?
Does he have a right to be upset?
In my opinion, he does, in his own mind. He is playing his damned heart out again this and wants to be recognized for it. Any person with a competitive mind would be upset at that. But alas, this is the ways of the Allstar game voting system.