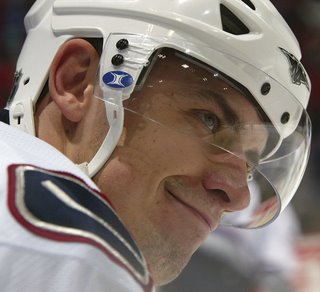 Let’s reflect shall we? If you recall, this team was tagged to go no where (anywhere from 9th to 11th in the conference, often dead last in the division). And they still could, who knows. Around this time last season the Canucks were in first too and then proceeded to fall flatly through most of February and March. This could still happen obviously.

So I’m not blowing smoke up their ass; rather, I’m simply acknowledging the fact they are playing the way they are is an extreme pleasure and, honestly, a surprise considering their putrid play in November.

In fact, just for fun, think of how they are playing now in contrast with last year's Crawford circus. Go ahead, just try it. Steady now, you may lose consciousness. Amazing right?

And it’s not just the fans. It’s got to be great to be a Vancouver team member these days. In no specific order:

To that end, I say the Canucks keep harnessing this element of revenge over the next few games before the All Star break:

- Someone remind Luongo that the Sens wanted him, but didn’t match Keenan’s asking price; hence they didn’t see the true value in him and preferred, instead, the laughable gaffe that is Gerber.

- Someone remind Salo that the Sens didn’t think highly enough of him to sign him after the 2002 season. They may have even taunted him and suggested he take up a second career as a ballerina. The police are still investigating…

- Someone remind Pyatt that this team thought so highly of him that they took a fourth round pick for him, the equivalent of asking for something off the dollar menu at McDonalds for free.

- Someone remind the entire team that Sabres were kind enough to take a second round pick off our hands at the last trade deadline for Mikka Noronen who played about three seconds for Vancouver before following the cash to Russia for the season. As if the Sabres need more solid young guys? Buggery.