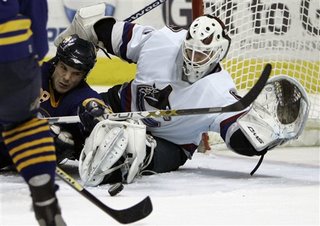 After the shootout loss to the Sabres last night, coach Vigneault had this to say:

"He showed a gutsy effort for a kid who doesn't get a chance to play a lot," said Vigneault, who gave starter Roberto Luongo a rare day off. "Our whole group is disappointed we didn't find a way to get two points for him."

You could see that the way the Canucks consoled Sabourin after the game ended. They all said something extra to him. Maybe: "Sorry, Sabou, we should have helped you get your first win."
Regardless, it was a hell of a game. The Canucks did look a bit dopey and road weary (except in the 2nd period), but Sabourin played a strong, almost brilliant game, and almost stole a win.
Ah, but the Sabres tied it up with only 40 seconds left in the 3rd: a flukey, lucky-break goal by Chris Drury that went off a few bodies before it trickled past Sabourin's glove. It was intense wasn't it? I just wanted the Canucks to win it for Sabourin, because he damned-well deserved it. And then to have it settled in a shootout.....damn. That game would have deserved to be played out in OT until someone scored.
So close, it was heart-breaking. 33 stops on 36 shots. Second star of the game. Did anyone see this happening? Not me. Hey, we may have a good backup goalie after all!