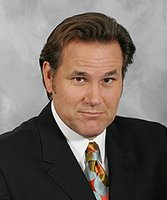 From the Toronto Star:

Damn those Europeans, they're ruining hockey.

Says who? Don Cherry? Haven't heard him rant on this for a while, but he's got a broadcasting cousin in the U.S. who has played the old Euro card. For that matter, Daryl (Razor) Reaugh, who does colour commentary for the Dallas Stars, says there may be too many damn Canadians in the NHL, too. Taking jobs from flag-waving, God-fearing, puck-slapping, Reebok-wearing Americans.

"You cannot really fall in love with a league that 78 per cent of its players are from a foreign country," he tells the Fort Worth Star-Telegram. "If you don't know much about a sport but you know somebody who is in it, you watch. (U.S. NHL franchises) get hurt by that. There should be a limit on Europeans.

"You can't tell me that some of the guys playing on fourth lines right now from Scandinavia are that much better than somebody coming out of Omaha, Neb., for the 4-6 minutes a night.

Europeans are tough to sell from a marketing perspective. Sports directors can't pronounce names so they say, `We'll cover NASCAR.'"

I don't have too much of an opinion on this except for the fact that I agree with his second-last sentence. In THAT way I can see his point about having less Europeans.