Cloutier may miss the rest of the season

Share All sharing options for: Cloutier may miss the rest of the season 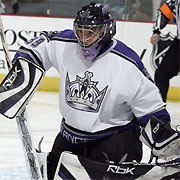 According to the Los Angeles Times, Dan Cloutier is facing an extended period of rest or season ending surgery on his hip. He has been out of action since December 23rd with the hip and knee injuries. His knee injury is apparently tendonitis. Cloutier will meet with team officials to determine the best course of action.
Cloutier's absence could free up about $3.1 million in salary for the Kings. Dan the Man has not performed well in LA this season with a 3.98 GAA and a .860 save percentage, which is the worst in the NHL.

I heard that Cloutier is in mental disarray and had tried to commit suicide in Hollywood last week. He jumped in front of a bus and it went right through his legs!