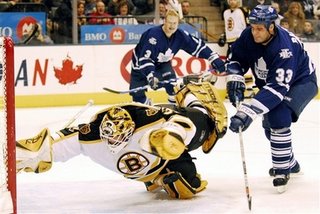 The Leafs played an in-your-face solid game tonight and were rewarded with a 5-1 win over the Bruins. Absent from tonight's game was the late-game meltdown that we were becoming accustomed to seeing. The Leafs kept the pressure on right until the end.
Mats Sundin scored 2 goals and added an assist.
Andrew Raycroft was superb, stopping 27 of 28 shots, and was the game's second star. He should have been the first star, IMO. Many of his saves were of the holy shit variety.
Jeff O'Neil had a goal and an assist. He is on pace for about 56 points this year, which is more than I expected he could get.
Only 4 penalties against the Leafs? It really was a Christmas miracle!
Good to see Chris Newbury get his first NHL goal. He's a tough dude, no doubt.
The win moves the Leafs back into a playoff picture, in 8th spot. But the East is about as clusterf***ed as the West in that area. The difference between 7th and 14th in the East is 5 points! That means that even Florida could make the playoffs! And they will! Oh yes!

So what was almost as good as the Leafs winning tonight? The Sens losing to the Thrashers with only 1:48 left in the 3rd! Slava Kozlov was at it again!