Canucks vs Leafs: I've been waiting a year for this!

Share All sharing options for: Canucks vs Leafs: I've been waiting a year for this! 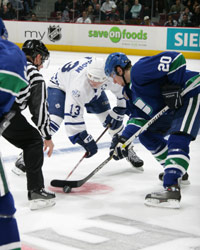 We don't see these 2 teams play eachother enough anymore. Whenever they do go head-to-head, it's usually a classic game, and my favorite game of the year. This time, it will be held in Toronto, so it may not be quite as raucous as it tends to be in Vancouver, where there would be up to perhaps 50% Leaf fans in attendance. There will be fans wearing Canuck jerseys in TO though, just much less.
The Canucks/Leafs have been my dilemna all my life. My father got me into hockey when I was very young. I started watching Hockey Night in Canada with him when I was about 4-5 years old, when the Leafs had Salming, McDonald, Sittler, Palmateer and Tiger Williams. So CBC 'corrupted' my brain at a young age. When I got a bit older, I'd also watch the Canucks on BCTV whenever that station would air their games. Ah, the voice of Jim Robson calling those games....
But I always liked the Leafs more, even in the dismal 80's. Even though all the kids in school cheered for the Canucks, I'd join in their excitement, but remained most loyal to the Leafs, even in their disgust.
In 1994, I cursed the Canucks for beating the Leafs in the semifinals. I still believe that Leafs team could have beat the Rangers.
Today I am loyal to both, as this site indicates. I can't help it. It may seem treacherous to some of you. But this is how I grew up. I talk more about the Canucks on this site because I get to watch every single one of their games and so it's easier to analyze. But make no mistake! When the Leafs play the Canucks tonight, I will be wearing my Sundin jersey and cheering for the Buds!

-The game will be shown at GM Place today so the crowd rivalry may still happen. Damn, wish I was in Van right now...I'd go! (and smuggle Cpt. Morgan's inside)

-The Leaf's lineup may be somewhat decimated, but they will rally for their fallen comrades, like they did against Buffalo.

-The Canucks will get try to 'get on up' after playing a dismal game on Thursday night against the Wild, and seeing their 7-game win streak come to an end.