Share All sharing options for: Canucks vs Canadiens Preview: 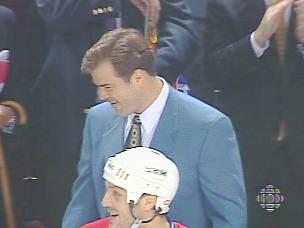 The change in the WFS banner is in anticipation of tonight's upcoming game between the Canadiens and Canucks. (Think I'm perhaps getting better at Photoshop). Kovalev and especially Samsonov have dried up offensively. In the last 6 Hab games, Kovalev has 3 assists while Samsonov has 1 piddly assist. Pathetic.
-The Canucks own the Canadiens in recent years, and are undefeated in their last 9 meetings. Domination. Last year, on January 11, the Canucks beat the Habs 6-2 at home.
-The Canucks have won 8 of their last 9 games.
-The Canucks went 5 for 10 on the powerplay against the Leafs.
-They remain 1st in the NHL on the PK, with an 87.7% kill rate.
-Taylor Pyatt sustained a broken thumb after being slashed by Jeff O'neil. Atta boy, Jeff!
-Luongo took a puck in the throat during practice on Sunday (pictured):

"It’s a little sore and swollen right now but I should be alright to play," said Luongo. "Those [shots in the throat] are the worst ones because you kind of lose your breath for a second and the swelling begins right away. It kind of feels like your throat’s closing up."

-Alain Vigneault, born in Quebec City, returns home. He coached the Habs from 1997-2000, replacing Mario Tremblay. He was in turn replaced by Claude Julien (**CORRECTION- Michel Therrien**) in 2000. Hopefully the Canucks put out a great effort for him.

-The Canadiens have lost 7 of their last 11.
-They have been outscored 10-3 in their last 2 losses.
-Their powerplay is dismal recently.
-Huet is sucking.
-The great Radek Bonk is injured.
-They are doomed! I say the Nucks win this one 4-3. But hey, why listen to me? I predicted a Leafs win on Saturday....

Reality Check is feeling pretty cozy and confident about a Habs win. He had this to say in our comments section:

Any wagers?
May I suggest this:
Habs win - WFS posts five pics of current Habs.
Canucks win - I kiss ass by noting 5 differences between the Sedin twins.
Deal?


Not only do you have a deal, but I'm going to one-up it! If the Habs win, I will put a different Hab in the Waiting For Stanley header every day for a week! If the Canucks win, you have to post something decent about a different Canuck player every day for a week. Deal?
Oh shit, I sure hope I don't have to put Saku Koivu on the header. That would be like wearing a dress.....
Open thread, RC?

Game time: 4:30 pm PST on Sportsnet Pacific.
Should be a beauty!