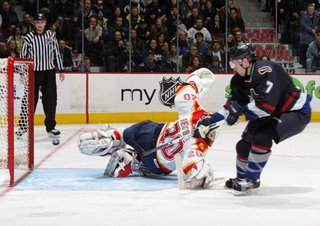 "I'm more happy to get a seventh win in a row than to beat them," said Luongo. "They played hard tonight. I'm sure they wanted those two points but they battled for the full 65 and should be proud."


The Panthers put out a great effort against the Canucks, outshooting the Nucks 36-29, (13-7 in the 2nd period) but the Canucks got a victory that they, for the most part, deserved tonight, despite the fact that both teams gave up unacceptable scoring chances. The same can be said about the goalies. Both Luongo and Belfour could have been better. Luongo gave up 2 soft 3rd period goals and Belfour's control of rebounds was lackluster. But as fans, we can't complain about the entertainment value. It was exciting.
But I think Hodge said it best tonight when he mentioned that the Panthers look alot like last year's Canucks. It's true. They can put up alot of pressure on offence, but defensively, they are prone to gaffs.
In my opinion, this game was a crapshoot, and a big part of that is because these 2 teams don't see eachother all that often. The Canucks looked alot less composed than they did against division rivals like Calgary or Edmonton, who they play numerous times each year.
Nevertheless, the Canucks have won 7 in a row and are on a roll. How big was this win? Well, it puts them 3 points ahead of Calgary and gives them a tad of breathing room in the Northwest Division.