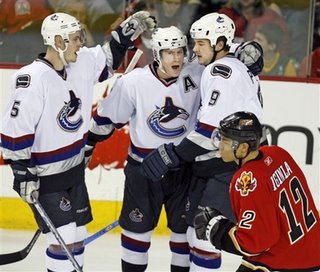 A nail biter for sure. This game was madness. The Canucks were, for the most part, in control for the first half of the game, attaining a 2-0 lead from goals by Trevor Linden and Brendan Morrison. But then the refs started calling a barrage of penalties in the 2nd period, which really changed the complexion of the game.
A lot of these penalties against both teams were pathetic. I think Mick McGeough was calling it down the line. But Brad Watson was a disgrace in some of his calls. Especially the tripping penalty on Luongo. Pathetic. And I usually don't gripe much about referees. Watson should retire his jersey early after that shit. I don't think he even saw it! HE then called an dumbassed even-up call soon after.
Sure, only one PP goal was scored on a combined 17 PP chances for both teams, but I thought the Canucks were in control up to the point that all the calls started. All the calls created a frenzy, and changed the momentum numerous times I thought.
Matt Lombardi, who would look better wearing a Canucks jersey, scored a shorthanded beauty on Luongo on a solo rush to cut the lead to 2-1 at the 6:00 minute mark of the 2nd. Panic time. But 9.5 minutes later, Alexander Burrows, who hadn't scored a goal in 48 damned games, performs a solo rush up the ice and dekes Kipper out of his protective cup. Burrows, with hands like that, how could it take you so long to score??? Probably the NHL goal of the night.
2 minutes after Burrow's wizardry, Lombardi scores another beauty over top of Luongo's right arm and it's panic time again. Right after Lombarment's 2nd, Bieksa takes offence to Andrew Ference and beats his pansy ass. But this seems to rally the Flames instead.
The Flames then outshot the Nucks 13-4 in the 3rd period and the Canucks, with the help of a brilliant Luongo, held them off.
Oh, and the refs put their whistles away in the 3rd for the most part! Colin Campbell must have made a call between periods.....
This rivalry is heating up.
The Canucks have won 4 in a row.
How many points did Iginla have tonight? NONE....AGAIN!! Nucks have his number. No one else does!

The Canucks have moved up to 7th spot now, and are 1 point ahead of Calgary, and 3 points ahead of 9th place Colorado, and 10th place Edmonton.