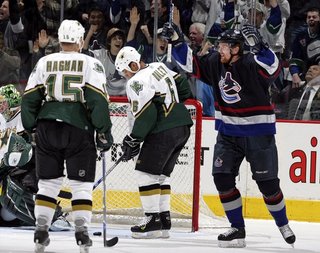 Starting the 3rd period, the score is tied 1-1. Mattias Ohlund scored a powerplay goal for the Canucks in the 1st period. Louie (who?) Erikson replied for the Stars in the 2nd period even strength, on a breakaway just after exiting the penalty box.
Thoughts about tonight's game so far:
-The Stars were outshooting the Nucks 24-15 after 2 periods.
-The Canucks look tired. Really tired.
-The Stars look depleted. No Lindros, Modano, or Morrow.
-This game is somewhat boring, except for when Turco and Luongo make dazzling saves.
With 1.1 minutes left, Matt (D-) Cooke takes a tripping penalty. Good timing, Cooke, you wanker! The Stars press hard in the last minute, but Luongo and the Canucks hold them off.
Oh shit...4 on 3 for about a minute in OT. I got a bad feeling about this...

OK, here's overtime:
Canucks kill off the rest of the penalty.
The Canucks start pressing, and Turco robs Hanky Sedin.
Then it's scrambly, and some more scrambly. Hey, is scrambly a fucking word? ( I now notice the rum kicking into my veins)
Jeeziz, another Canuck penalty..this time time against Danny Sedin. Fucking shit, these hooking calls are starting to piss me off.
Stars press on the PP, and hit the post..phew. Luongo stops the Stars with 1 second left, and bawango, we have a shootout!


Shooter 1: Naslund. He missed the puck at center!!!! Dumbass!! He then went right and raised a backhand shot into Turco's glove. Lame
Shooter 2: Zubov. Whoa! Hits the post!
Shooter 3: Morrison. Skates in and shoots it over Turco's pad! Scores!!!
Shooter 4: Jokinen. Oh boy... Jussi made him look stoopid.
Shooter 5: D. Sedin. Gets fancy and fukks it up. Turco poke checks him
Shooter 6: Ribiero. The spineless Stars weasel looks as stoopid as Daniel and misses.
Shooter 7: Pyatt. Tries a backhander but Turco stops him!
Shooter 8: Erikson. Looks like a putz as well. Misses.
Shooter 9: Bieksa. He shoots it into Turco's glove...effortless save
Shooter 10: Mietennen. Luongo sprawls out like Hasek and stops him!
Shooter 11. Kesler. Scores!!! Backhander beauty!!! Viggy's laughing again!!
Shooter 12. Barnes. No way!!! Luongo stops him!!!
Game over!!!!! Nucks win!!!