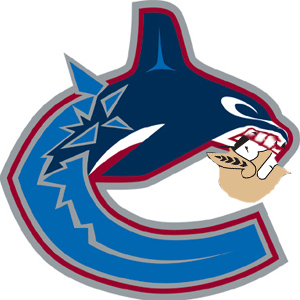 "Our (penalty-killing) was solid again tonight (Sens went 0-for-5), but without a doubt Luongo was the difference," coach Alain Vigneault said. "He's the guy that permitted us to win. They outplayed us totally in the third period and he shut them down."
-Luongo's shutout streak lasted 154 minutes, 42 seconds.
-Sure, Luongo was great once again, but the Canucks' team defence was great as well.
-Ottawa had a few terrific chances, but there was not alot of them in their 35 shots. The Canucks played good team D regardless.
-The Canucks were outshot 35-14. Was I drunk the whole time, because it did not seem like the Sens had that many chances.
-The Sens outshot the Nucks 14-0 in the 3rd. The Canucks allowed 1 3rd period goal by Daniel Alfredsson, but hung on for the win, including killing a 5 on 3.
-Taylor Pyatt had 2 points (1 goal and 1 assist.)The goal he scored went off his skate.
-Don't you love the Canucks' style of play? They play tight D even though they pressure offensively. They remind me of the Devils of the past decade. They wait for opportunities. When they score first, it deflates the opposing team so bad that they can't recover. All of the pieces are in place right now, because even when the opposing team pressures, Luongo stops nearly everything that comes his way. It seemed like the Senators experienced the same problem that the Habs experienced last game. They got off to a quick start, but the Canucks held them back, got some breaks, and in turn scored the first goal. This is what happens when you're on a roll.
-This was no ordinary feat for the Canucks. They beat the hottest team in hockey, and made them look insignificant.
-Notice how they continually shut down other team's big lines? Sure, Alfie scored a goal tonight, but can you think of any Sens that stood out? I don't remember seeing Heatley until the 3rd period.
-If Jan Bulis isn't happy in Van, fuck him. Trade him for a face cloth and a bar of soap. He was inefficient tonight...my only gripe.
-Willie Mitchell was used sparingly: 7:14 icetime.
-Trevor Linden only played 10:28, which is about 4-5 minutes less than his usual icetime. Is Trevor cooling off?

Tomorrow night, the Canucks will be in Buffalo to play the Sabres, one of the best teams in hockey. The Sabres defeated the Bruins on Wednesday night, 6-3 to end a mini-slump for them. Can the Canucks pull another trick out of their hats? Can they shut down a team that has 4 attacking and effective lines and a solid goaltender?
I will play the pessimistic role and say 'no'. My guess is that the Canucks will be a tired at the end of their roadtrip and fall prey to the Sabres.
If they defeat the Sabres, expect a louder, more appreciative crowd in GM Place when they return home.

For some reads from the losing side, check out Sherry's post game analysis at Scarlett Ice. No, she isn't panicking about the loss. Also, see The Battle of Ontario, where some commenters called the game boring, and others needed help with their math.